Lifelong learning has come into greater focus recently, as globalization has gathered pace and people face uncertainty in their everyday lives. I believe that promoting lifelong learning is an action that directly reduces risks for both the state and the individual. Employing Ulrich Beck’s theory of risk, I am interested in exploring the dynamics of lifelong learning at the grassroots level in Japan and Europe (in particular, Nordic countries for a comparative perspective), both of which are faced with a major institutional change – the rollback of welfare state provisions and the rise of neoliberal politics. I look at how “large processes” (in Charles Tilly’s sense) of social change shift the responsibility of risk management in economic, social, and political institutions from states to markets, from public to private as well as civil society bodies, and from collectives to individuals. My ethnographic research directly tackles this puzzle, showcasing lifelong learning through the lens of risk.

This book project was funded by two fellowships: For the academic year 2009-2010, I was on the postdoctoral fellowship in the German Research Foundation (DFG)-funded research project 1613 Risk and East Asia at the University of Duisburg-Essen Institute of East Asian Studies.  In the following year, 2010-2011, the fieldwork was supported by a grant from the Abe Fellowship Program administered by the Social Science Research Council of the Untied States. The book also intends to enhance anthropological understanding of neoliberalism by showcasing the re-organization of Japanese public space through new disciplined knowledge generated by the state’s policy of promoting lifelong learning.

This book is an ethnographic study of a Japanese voluntary organization, a Non-Profit Organization (NPO), the seed of the institutionalization of civil society under the 1998 NPO Law.

Can civil society be constructed successfully by a state? – This book seeks to answer this question through the case of Japan. Today, civil society is a transnational phenomenon. It broadly refers to non-state institutions and associations that are critical to sustaining modern democratic participation. Each society and culture molds its own version of civil society, reflecting its most important values, such as individual liberty, public solidarity, pluralism, and nonviolence, all of which sustain a dynamic civic culture. In contemporary Japan where the boundaries between state, civil society, and the market are often complex and/or blurred, the NPO has been proliferating as a key actor in shaping Japanese “civil society.”

Primarily, my research on civil society contributes to the anthropological scholarship on neoliberalism. Neoliberalism is commonly viewed as an economic doctrine that endorses individual freedoms and rights, and seeks to limit excessive intervention by the state through decentralized authority. The ideology has become dominant in advanced industrial countries, like the UK, the United States, and Japan, since the 1980s. Meanwhile, anthropologists offer alternative perspectives on neoliberalism; we present neoliberalism as a technology of governing people. A variety of neoliberal strategies of governing are re-engineering and re-fashioning political space and populations, including people’s relationships to each other, their sense of membership in a public. My ethnographic case study documented as The Failure of Civil Society? illuminates a political project made by the Japanese neoliberal state to mold a particular set of the state-individual relationships in a specific manner under the name of civil society.

Another contribution of this project was to fill a substantive gap in the scholarship on current civil society. Most of the work in the field contained normative theoretical formulations with Western intellectual origins or in a post-socialism context. The book fills such an ethnocentric hole, as it is an original ethnography, bringing Japan’s civil society experiences squarely into the global discourse on civil society. I explored the social and historical particularities of the Japanese meaning of “civil society” or shimin shakai – looking at how the concept is interpreted and practiced at the ordinary grassroots. The conflicts within the ongoing NPO construction present powerful narratives–real voices and real experiences against the state discourse, which have yet to be vibrantly documented as a form of ethnography; I destabilize the conventional assumption of civil society.

Ultimately, this book calls into question the relationship between the state and the third sector in contemporary Japanese social and political life, and broadly raises the issue of whether civil society can be intentionally created through the action of the state. More practically, I believe that the narratives documented in this book would provide Japanese policy makers with a significant strategy for affecting the NPO policy. Further, there are important policy implications of the book for any state seeking to mold its society in specific ways.

This book represents a pioneering interdisciplinary effort to analyse Asian civil society under authoritarianism, a regime type that is re-appearing or deepening after several decades of increased political liberalisation. Contributing to our understanding of the tensions, dynamics, and potentialities that animate state-society relations in authoritarian regimes, this will be essential reading for students and scholars of civil society, authoritarianism, and Asian politics more generally.

This edited volume addresses how transnational interactions among civil society actors in Asia and its sub-regions are helping to strengthen common democratic values and transform dominant processes of policymaking and corporate capitalism in the region.

The contributors conceive of transnational civil society networks as constructive vehicles for both informing and persuading governments and businesses to adopt, modify, or abandon certain policies or positions. This volume investigates the role of such networks through a range of interdisciplinary approaches, bringing together case studies on Asian transnationalism from South, Southeast, and Northeast Asia across four key themes: local transformations and connections, diaspora politics, cross-regional initiatives and networks, and global actors and influences. Chapters demonstrate how transnational civil society is connecting people in local communities across Asia, in parallel to ongoing tensions between nation-states and civil society. By highlighting the grassroots regionalization emerging from ever-intensifying information exchange between civil society actors across borders – as well as concrete transnational initiatives uniting actors across Asia – the volume advances the intellectual mandate of redefining ‘Asia’ as a dynamic and interconnected formation. 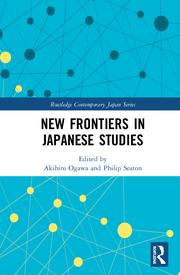 Over the last 70 years, Japanese Studies scholarship has gone through several dominant paradigms, from ‘demystifying the Japanese’, to analysis of Japanese economic strength, to discussion of global interest in Japanese popular culture. This book assesses this literature, considering future directions for research into the 2020s and beyond.

Shifting the geographical emphasis of Japanese Studies away from the West to the Asia-Pacific region, this book identifies topic areas in which research focusing on Japan will play an important role in global debates in the coming years. This includes the evolution of area studies, coping with aging populations, the various patterns of migration and environmental breakdown. With chapters from an international team of contributors, including significant representation from the Asia-Pacific region, this book enacts Yoshio Sugimoto’s notion of ‘cosmopolitan methodology’ to discuss Japan in an interdisciplinary and transnational context and provides overviews of how Japanese Studies is evolving in other Asian countries such as China and Indonesia.

New Frontiers in Japanese Studies is a thought-provoking volume and will be of great interest to students and scholars of Japanese and Asian Studies.

Routledge Handbook of Civil Society in Asia is an interdisciplinary resource, covering one of the most dynamically expanding sectors in contemporary Asia. Originally a product of Western thinking, civil society represents a particular set of relationships between the state and either society or the individual. Each culture, however, moulds its own version of civil society, reflecting its most important values and traditions.

This handbook provides a comprehensive survey of the directions and nuances of civil society, featuring contributions by leading specialists on Asian society from the fields of political science, sociology, anthropology and other disciplines. Comprising 35 essays on critical topics and issues, it is divided into two main sections:

Part II offers a series of thematic chapters, such as democratization, social enterprise, civic activism and the media.

As an analysis of Asian social, cultural and political phenomena from the perspective of civil society in the post-World War II era, this book will be useful to students and scholars of Asian Studies, Asian Politics and Comparative Politics.

Lifelong Learning in Tokyo: A Satisfying Engagement with Action Research in Japan. Anthropology in Action: Journal of Applied Anthropology in Policy and Practice 20(2): 46–57 (2013)

Risk Management by a Neoliberal State: Construction of New Knowledge through Lifelong Learning in Japan. Discourse: Studies in the Cultural Politics of Education 34(1): 132–144 (2012)

As If Nothing Had Occurred: Anti-Tokyo Olympics Protests and Concern Over Radiation Exposure. Japan Focus: The Asia-Pacific Journal. Special Issue: Japan’s Olympic Summer Games — Past and Present, Part II. (2020)

The book was a winner of the Choice Outstanding Academic Title award in 2014.

The Construction of Citizenship through Volunteering: The Case of Lifelong Learning. In Japan’s Politics and Economy: Perspectives on Change. Patricia A. Nelson and Marie Söderberg, eds. London; New York: Routledge. Pp. 86–98 (2009)

海外からみた日本の社会教育・生涯学習～これからどんなデザイン・工夫が必要か ―「すみだ学習ガーデン」の事例を引きながら『社会教育』日本青年館発行 889号10–13頁 (2020 年7月)[Social Education and Lifelong Learning in Japan from an Overseas Perspective ~What kind of designs and innovations will be needed in the future – Drawing an example from Sumida Gakushu Garden]. Shakai Kyōiku 889: 10–13. Tokyo: Nippon-Seinenkan* (July 2020)]

Protest and Democracy in Asia. Pursuit – an interview article on my peace research written by Ben Rodin. Published by the University of Melbourne. (July 2017)

*Nippon-Seinenkan is a national youth center working closely with Japan’s Ministry of Education.

1. 僕が文化ボランティア全国フォーラムに参加するわけ My reasons for participating in the national forum of culture volunteers, 87:37. January 2009